Proposals of thematic areas for conference participants submitting their papers:

In recent years the global economy has encountered significant shocks. The Coronavirus (COVID-19) pandemic, directly and indirectly, impacted economies, societies, and politics. The rapid increase in infection rates met with diversified responses in the Asia-Pacific region, including various containment measures and even strict nationwide lockdowns. These three aspects of reality in the Asia Pacific have undergone irreversible and multidimensional changes since the coronavirus outbreak. With the widespread dissemination of vaccines, the intensity of the pandemic has been significantly reduced. However, after a brief period of “relaxation” in the global economy, another event that has disrupted the international order occurred, namely the Russian-Ukrainian war. Although the war involves directly two countries, indirectly it influences the global economy – for example global value and supply chains have been disrupted once again and are currently undergoing reconfiguration.

Today, Asia-Pacific and EU countries face severe threats to the stability of their regions. The importance of economic, political and social integrity has been noticed again as one of the crucial factors constituting stability of the countries, regions and the whole global economy. This provides a chance for both regions to strengthen their multidimensional relationship, underlining a trading sphere.

It is vital to examine the current situation and its possible outcomes for both regions, separately and jointly. The time has come to ask questions about the future. What will be the post-war reality in the Asia-Pacific and EU region? How will Asia-Pacific and EU relations be formed? Which areas will be crucial for political, social and economic competition between these regions? What are the challenges, barriers, but as well opportunities for the EU companies in the Asia-Pacific markets?

The aim and scope of the conference

The 11th Asia-Pacific International Conference is entirely dedicated to answering these fundamental questions. It aims to provide an open platform to facilitate sharing ideas and findings in the post-war reality and beyond in the Asia Pacific, as well as in a sphere of mutual relations between Asia Pacific and the European Union.

The Asia-Pacific Research Centre at the Wroclaw University of Economics & Business, together with its foreign partners, would like to invite submissions of completed manuscripts, research-in-progress papers, panel proposals, workshop and tutorial proposals addressing the economic, social, and political aspects of the new order in the Asia-Pacific region.

The beginnings of our conferences date back to 2008 when we invited researchers and practitioners who focus on the Asia-Pacific region to the Wroclaw University of Economics and Business for the first time. From that moment on, economists, political scientists, diplomats, and members of the business community and entrepreneurs have established a platform for discussions and deliberations about the current trends and phenomena occurring in that region and shaping the global economy. During our Asia-Pacific conferences, we hosted many honourable guests, among them the Ambassador of New Zealand Mrs Ruth Pearce (2010, 2011), the Ambassador of Australia Mrs Jean Dunn (2012), the Ambassador of Japan Mr Makoto Yamanaka (2011), the Ambassador of the Republic of Korea Mr Ji-in Hong (2014), the Ambassador of the Republic of the Philippines Mrs Patricia Ann V. Paez (2014), the Ambassador of India Mr Ajay Bisaria (2015), the Ambassador of Japan MrShigeo Matsutomi (2016), Mr Alain Ruche from the European Commission (2011), as well as representatives of the Polish government and the Polish diplomatic service and many experts from different scientific centres around the world and Poland. You are cordially invited to join us on the occasion of the 11th edition of our event.

The Asia-Pacific Research Centre is a research unit at the Wroclaw University of Economics and Business, whose primary objective is to initiate and conduct interdisciplinary research projects addressing issues concerning the Asia-Pacific region and its relations with Europe. Moreover, the APRC works on establishing and sustaining the network between the University and the Asia-Pacific region and European research institutes, non-governmental organizations, and public institutions. Regarding the academic mission to share knowledge and expertise, the APRC cooperates with members of the Asia-Pacific business community operating in Poland (especially in Lower Silesia) and the Polish and European entrepreneurs conducting their business activity in the Asia-Pacific countries. The APRC members prepared many analyses concerning the Asia-Pacific markets, including specialist reports for the Polish Information and Foreign Investment Agency (currently the Polish Investment and Trade Agency). Moreover, in 2019, with the support of the INTEREKON programme and in cooperation with the Takasaki City University of Economics, the APRC established the Polish-Japanese interdisciplinary research team. 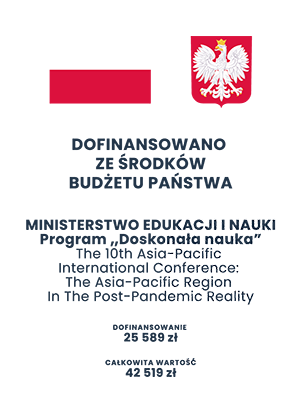